The writer friend and I were talking a while back. As I’ve said, I’m a “seat of the pants” writer, and so is she. Book ideas don’t come to us in any logical way. At first we get brief glimpses of some characters who give us a few individual scenes – in no particular order. And we wonder how the heck they’ll fit together.

As we talked, I realized our writing is a lot like doing a puzzle. Those unrelated scenes the characters give us are like the “easy” parts of a puzzle – the pink flamingo or purple house that stand out from everything else. What’s harder is all that “filler” in between – the vast multihued sky and the endless field of green grass between the flamingo and house – otherwise known as the plot. 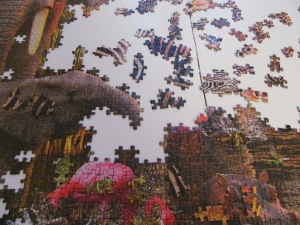 But sometimes I look at a scene I’ve written and wonder how it can possibly tie into anything else – like the opening to Kathryn Donnellan’s universe in Summer at the Crossroads. That’s the first scene I wrote in that section. Kathryn hears a news story on the radio about the first lady’s upcoming trip to another country, which is an attempt to restore relations. They soured after the previous US president took an ill-advised stand and a diplomat was caught hacking into the State Department’s computer system.

Where was I supposed to go with that? But as I wrote, the “filler pieces” came together. Just like a puzzle, it wasn’t always easy. Some pieces didn’t belong in this particular story and had to go. Others didn’t fit where I originally thought they would. But the pieces of Kathryn’s story ultimately fell into place and formed a cohesive whole.

Of course, now Kathryn thinks that’s how the sequel should go, too. So I’ve got a plot that includes events at a winery in Oregon, an intrusion into her private life, and orders at work that could destroy a friendship. Those are the pink flamingos and purple houses. But how the heck are they going to tie together? I just have to take a deep breath and trust my characters. They know what they’re doing.

Where am I heading with this post? Well, just as there’s no single “right” way to assemble a puzzle, there’s no single “correct” way to write creatively. It’s not always easy, but we all find the method that works for us. Maybe the “easy” parts come to you first as they do with me (do the border, then grab the pieces with the obvious patterns/colors from the box) – we’re the “pantsers.” Or  maybe you get everything laid out first (border pieces, then group ALL the pieces by category before you even start) – you’re the “outliners.”

Each approach has its advantages – and disadvantages. Neither is “better” or “more professional” than the other. And there’s no reason to envy someone who approaches writing from a different direction that you do. If your method works for you, then it’s good.

So readers, which of you are the pansters? And who are the outliners? Or do you consider yourself a combination of the two?

6 thoughts on “Writing – The Puzzle Analogy”