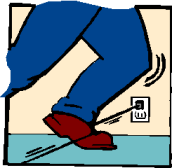 How often has it happened to you? You’re reading a book, caught up in the tale, and then a chance word or phrase makes you stumble. As a result, you’re taken out of the story.

If the writer’s lucky, you get up, dust yourself off, and return to the world he wanted you to experience. But if you don’t, he may have lost you for good. That’s a writer’s nightmare.

(Actually, we have lots of nightmares. But I think losing readers is one of the worst. In the dream, they usually go on to post damning reviews that go viral and every media outlet is trashing you, including your family and friends on Facebook and Twitter. Even worse, your mother learns how to post a video on YouTube and denies any relationship with you.)

Sometimes, it’s as simple as a word we don’t know. This happened with one of my beta readers. In Death Out of Time, a crime scene analyst says there was an anomalous reading on a radiation detector. My reader wasn’t familiar with “anomalous.” She picked up its meaning in the following dialogue, but it still took her out of the story for a moment.

Other times, a passage might make perfect sense to the writer, but something about it makes the reader say, “Wait a minute. Where did that come from?” Readers bring a lot to a book. They form their own images of the characters and events, sometimes colored by their own experiences. But most of them don’t bring telepathic skills.

If calm, cool, and snake-owning Main Character suddenly freaks out in the middle of the book when he sees a worm, the writer better make it clear why that happened—either in good foreshadowing in an earlier section or right then and there when Main screams and climbs the nearest tree. Otherwise, readers will start to wonder what they missed.

Readers also stumble on inconsistencies. In an earlier version of my work-in-progress Summer at the Crossroads, Kathryn and Mikhail were asked to bring a bottle of red wine to a dinner. When they got there a few sections later, I had Mikhail open a bottle of white. Oops.

There’s probably nothing wrong with momentarily confusing the occasional reader in different parts of a story. And one or two unfamiliar words in a gripping story shouldn’t cost you a reader. But there’s a problem if lots of people are getting pulled out in the same places. We haven’t done our job as storytellers if that happens.

So before you release that story to the world, check your manuscript for trip wires. Listen when your beta readers describe their confusion about a scene and then sit down and make it clearer. If necessary, take some of the back story out of your head and put it in the book. Don’t give people a reason to put down your book for good—unfinished.

Has a published author tripped you up so badly that you stopped enjoying a book? Or worse, stopped reading it? Have you writers in the audience found trip wires in your drafts?

21 thoughts on “Tripping Up Readers”