Previously we left our poetic archaeologist in the field, nursing a sore back and struggling to get up to check out the commotion at the other end of her site. Through the miracle of fiction (and maybe time travel), she’s feeling better as she reaches the backhoe and her crew.

Features are “popping up” around the site. And while the surface collection showed both Native American and historic period artifacts, most of the features are yielding artifacts from the 1700s. This one, though, is a big one.

The backhoe has revealed a rectangular outline of bricks, with a “bump out” and gap in the bricks. It’s probably a cellar. Our archaeologist may have found the remains of the original kitchen. Or maybe it’s a work building. She’ll learn more as she excavates it. If the artifacts are mainly items like broken dishes and crockery, cast iron kettle fragments, and animal bones, the cellar was probably under the kitchen. Different artifacts would mean the cellar was for another building, such as a “wash house.” 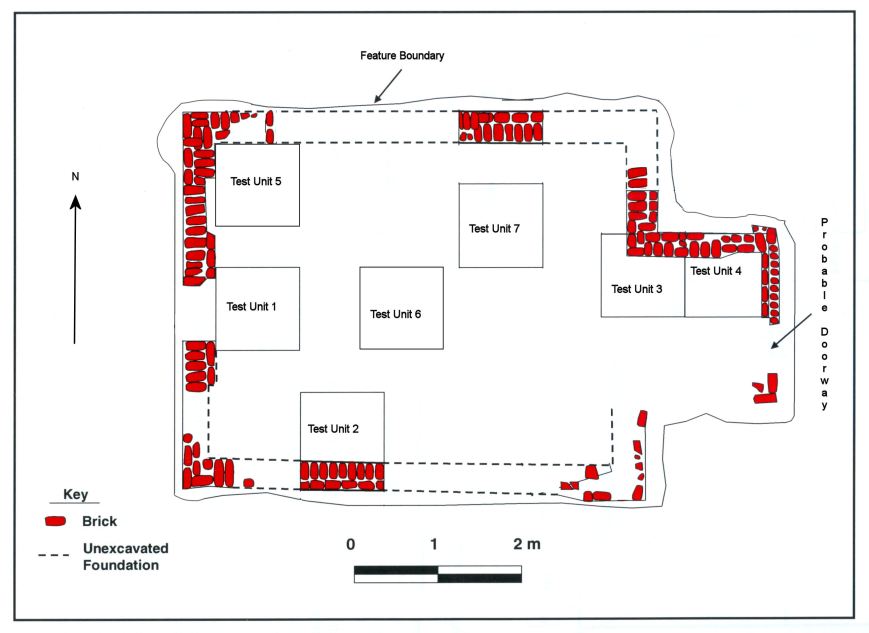 We’ll have to make do with the plan map prepared in the lab. I don’t have a field photograph. This cellar isn’t related to the Addison family mentioned below.

This is the “stuff” that brings history and dry documents to life. To her (and me), there’s something special about holding the tangible remnants of the past in her hands. You can feel a connection to people who came before.

If she’s lucky, the “1798 direct tax” still exists for her project area. That was the first federal property tax, and there’s a wealth of information about plantation size and buildings on it. Sometimes we’re able to match up a building description in the direct tax with features found in the field.

If you click on the image above, you can read the building descriptions. Anthony Addison’s house (1,800 square feet at least; more if there was a loft or second story) was huge for the time. Henry Addison’s home (384 square feet) was far more typical. Imagine a family of four (or five, or …) living in a home that size. Granted, there was probably a loft where the entire family slept. And a kitchen could have been in a separate building—or not. Bathrooms didn’t exist. Weather and light permitting, certain bodily functions were attended to in an outside privy. Chamber pots did inside service during the night or in really bad weather. Our modern American ideas of privacy and “needed” space were unknown in Colonial times.

But we can’t get ahead of ourselves. Our archaeologist has been doing background research, but she needs to excavate this feature before she can jump to any conclusions. The plan map above shows where her test excavations will go. These seven test units would be overkill for a Phase II excavation. She’s just planning ahead. She’ll just do a couple of units in the cellar in this round. Each unit will be 1 meter by 1 meter in size (about 3 ft by 3 ft).

Even at this point she knows the site is important. There will be another, more extensive round of excavations when this stage is done. Her crew has some digging to do. It’s getting hot and humid. But they know this is a good site. They’ll handle it. They’re an experienced crew. Some of them are off to gather shovels, buckets, and other excavation supplies.

At the office today, so I can’t reply to comments until I’m home. Hope you’re enjoying the archaeology tour. 🙂

“I have been examinating out many of your posts and i can state pretty good stuff. I will definitely bookmark your website.” — And I can state you need to improve your “English-generating” programming. But I hope you never do. I like you for the recognizable s*pa*m you are. 🙂

“I’m just writing to let you know what a incredible experience my friend’s princess went through checking your web site.” — The friend has a princess? What kind of gift could you possibly give someone like that? Talk about having everything!

And last, but not least, Winfred Snoozy will also watch out for brussels. I’d find that hard to do with a name like Snoozy.