backfill and wrap up 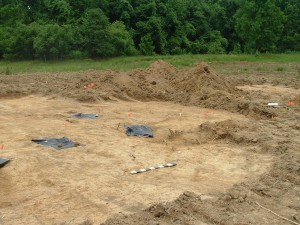 For protection, black plastic is placed over features that will be excavated at a later date.

With a last push, Meghan and her crew have finished their Phase II excavations somewhere in the Mid-Atlantic. They’ve “backfilled” the test units and most of the machine-excavated trenches so no one accidentally falls into a hole and gets hurt. The features they found but didn’t excavate were protected with a layer of heavy plastic sheeting before piling the dirt over them. This excavation isn’t over. And you’re in for some bureaucratic jargon with this post.

Meghan knows the site is significant. It meets the eligibility requirements for the National Register of Historic Places. She’s been in contact with her client and the State Historic Preservation Officer (SHPO) and kept them up to date on her findings. Her client has several options. He can modify his proposed project to avoid damage to the archaeological site, such as by setting it aside as greenspace that will be protected by a legal covenant. In this case, he’s decided that isn’t feasible. He could abandon his plans. But he won’t do that, either. His project is a good one and will be profitable. Instead, he’s already contracted with Meghan to do a Phase III mitigation or data recovery project.

A small “pit feature,” as yet unclassified. Can you see the slight differences in soil colors on the ground surface between the feature and the “normal” soil behind the board? Hot dry summers make seeing such changes even more difficult than normal.

After Meghan presents her formal Phase II findings in a report and the “SHPO” formally concurs with her findings, she’ll begin work on the Phase III project. Mitigation, or data recovery, usually entails more intensive excavations and historic research as well as specialized analyses. Sometimes an entire site is excavated at this stage, mainly if it’s small or won’t yield huge numbers of artifacts. Larger sites, and those with potentially thousands (or tens of thousands) of artifacts are “sampled.” A plantation site like Meghan’s, which also contains a Native American component, will usually be sampled. She’ll excavate some of the smaller features (especially the Native American features) completely and only selected parts of larger features like cellars or other structural remains. 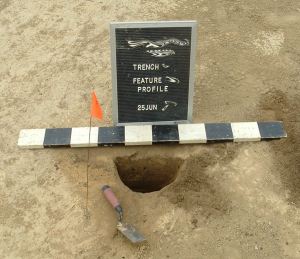 This small feature, the stain left by a wooden post, is similar to some Meghan found.

Archaeological projects like this are often lumped with the larger environmental studies that are done for major construction projects. Sometimes, environmental conditions are enough to stop a proposed development. Endangered plant or endangered species might live in the area. Or critical wetlands could be present. Often, though, a significant archaeological site is “mitigated.”

Because the artifacts can be sent to a museum, along with the excavation notes and photographic documentation, the information about the site is “preserved for posterity.” It’s a relatively straightforward process to excavate the site and allow the project to continue. It costs a few dollars, but usually not too much to stop a project, especially something like a new interstate or cross-country gas pipeline. (Or, in Madeleine O’Brien’s story, a subdivision of million-dollar homes.)

So it’s back to the lab for Meghan and her crew. They’ll finish washing, labeling, and analyzing the artifacts from the project. And Meghan will write up her Phase II report and recommend that the site is eligible for listing in the National Register of Historic Places. Looking ahead, we know the SHPO will concur and find the project will have “an adverse impact” on a historic property. Later this year, Meghan and her crew will be back on site.

But you never know what kind of project might pop up before then….