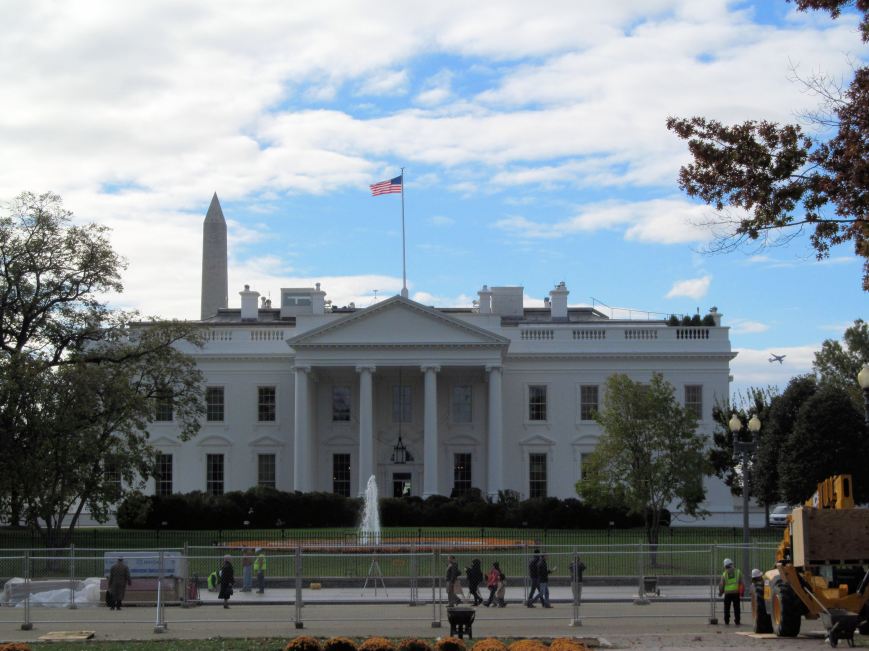 Even the President of the United States has to put up with unsightly public work near his home. There’s no particular reason for this photo with this post. But the juxtaposition struck me when we were there last Saturday. Well, not at the White House, but in DC.

Maybe you’ve seen my recent comments about revisions feeling like I’m slogging through a sea of molasses. For those of you unfamiliar with the substance, it’s a thick, brown, gooey syrup made from the by-products of sugar-making. I’m not particularly fond of it.

The revisions after Draft 2 of Death Out of Time were painstakingly slow. What should I change? How do I take these beta comments and make a better story? Somehow, I managed. Draft 3 was a heck of a lot better. But the beta comments showed it still wasn’t the final draft. I had both sci-fi and non-sci-fi readers for Draft 3, and there were interesting differences between their comments. I think the comments also reflected some male vs. female reading differences and some plot-driven vs. character-driven personal preferences.

So “interesting” differences basically translates to “How the heck do I decide what to do?” Let me be clear — my betas weren’t suggesting I write the book “their” way. These are some kick-butt betas who know that’s not their role. But they pointed out elements that tripped them up, took them out of the story, left them confused, and needed strengthening. Then they offered possible fixes.

Of course, when you ask “X” number of people for their thoughts, you get “X” number of answers. You’ll see overlap but also many differences. One reader might love a scene while another suggests axing it. One character resonates with one reader while another thinks he’s flat. When you have more than one person read your work, this will happen.

This is a real test of how serious we are about this “writing thing.” As I said in my beta reading series, writers get discouraged when the comments come back, especially on early drafts. It’s human nature to think we’ve already done our best. I went through a few days wondering why I was even trying. Who was I kidding? Who would like this book?

But even on those days, I couldn’t not think about the story. While I didn’t touch the manuscript, I mulled over those comments. Maybe not much at first. But enough to get my creative side simmering in the background. There were emails with a couple of readers where I tried to clarify my thoughts about their comments. There were talks with another.

And this last week, the revision ideas finally started to take shape. I could see how to change certain elements to better illustrate the characters, their relationships, and motivations and to raise the stakes and heighten tension. I don’t have it all worked out yet. But I’ve opened the Scrivener file and started making changes.

After a few days of depression and a few weeks of slowly emerging ideas, my struggles in the sea of molasses seem to be easing. Maybe the molasses is being watered down. But I prefer to think my writing legs are getting stronger and my Muse won’t abandon me. (She’s of the kick-butt variety and won’t let me wallow in self-pity too long. She’s another post in herself.)

As for those self-doubts? Who would like this book? Well, for starters, my betas. I believe them when they say the idea is good and I’m writing it well. They’re simply helping me turn it into the best book I can write. That’s what beta readers do. And mine are awesome. If you enjoy the book when it’s published, they’ll have been a big reason why.

This is where I hope to be spending more time now.

How about you? Have you surprised yourself by sticking with something long after you thought you would give up?