Forget politics. They have nothing to do with this post. This is just a day to share some photos of some lovely days spent having fun in Washington, DC.

A former insurance company now houses a coffee shop on the main floor. Guess which chain.

This is the oldest bank in DC. They don’t build them like this anymore, do they?

The oldest bank in DC

This photo is for my Australian pen pal and blog buddies. According to my pen pal, the kangaroo and emu were chosen for the country’s seal because neither can move backward. 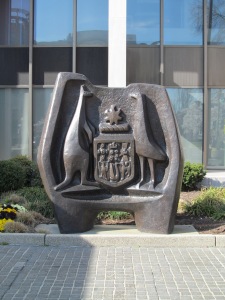 Outside the Australian embassy

There was a period in the 1800s when the Second French Empire style was popular in the US. This is one of the best examples. As you might guess, DC also goes for impressive monuments.

Something about baseball on the Fourth of July says “America.” The area around Nationals Park is seeing new development and renewal.

And Christmas in English-speaking countries wouldn’t be complete without “A Christmas Carol,” right?

Ford’s Theater for “A Christmas Carol”

In mild years, you can see flowers blooming the day after Christmas.

Still, DC is also a place where we can gather to express our diverse views about the country. We should never take that right for granted. Or abuse it. 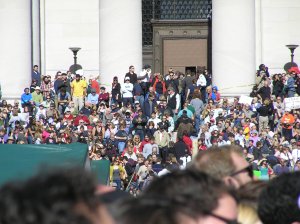 More of the rally

I hope your weekend will be spent somewhere you enjoy with good company.

44 thoughts on “My Favorite City”