We drove back from Chicago to Maryland on Friday. It made for a long day (11 hours and 20 minutes on the road), but we had the three-day Memorial Day weekend to recover from our break.

Those long drives get me thinking, and today’s post covers some of my thoughts. The photos are from the trip, but they aren’t related to the musings. I just wanted to share some of them.

If you live in the US, have you ever noticed all the blown truck tires on the interstates? I’ll swear there were a hundred of them between Maryland and Indiana. But I’ve never seen a truck on the shoulder with the driver putting on another tire or waiting for roadside assistance. Thank heaven I’ve never seen one blow out, either, because that has to be dangerous for nearby vehicles.

This one’s for Carrie Rubin of The Write Transition and fans of “The Big Bang Theory.” The Cheesecake Factory at Water Tower Place in Chicago, with “American Girl” making its presence known, too.

Have you ever driven through “ghost” construction zones? On the trip west, we passed a number of construction signs telling us to slow down. But there was no evidence of construction other than the signs. And this was the week before Memorial Day, so there shouldn’t have been any holiday breaks then. What’s really being done in those areas?

Why were so many cars on the shoulders? I don’t think I’ve ever seen so many cars pulled off the road for unknown reasons as I did Friday. No flat tires. No open hoods. No changing drivers. No digging through the trunk or rear seats. Were people being good and pulling over to talk on the phone? Somehow I doubt that.

This was a fun place for a tour. Lakefront is a small, craft brewery in Milwaukee. If you can get any of their beers near you, my husband and I heartily recommend them.

When did Canada geese become perching birds? I wish I would have taken a photo of the pair that landed on a building’s roof in Chicago. Or the one that laid her eggs on the support of a pedestrian bridge on the Milwaukee River—at eye level with the daily crowd. The city erected a burlap screen, but you could easily see behind it as you approached. Mother Goose was tending a nest with at least ten eggs in it, calm as you please.

Why is it that every time we make a May trip to Chicago and Milwaukee the weather turns cold??? It only got to 53 in Chicago on Thursday, and it dropped to 44 while we drove through Ohio on Friday. At one stretch, I wouldn’t have been surprised if it started to snow. And Chicago definitely lived up to its nickname of “The Windy City” on Thursday. If not for a fellow tourist’s quick hands, my husband’s baseball cap probably would have ended up in Lake Michigan. 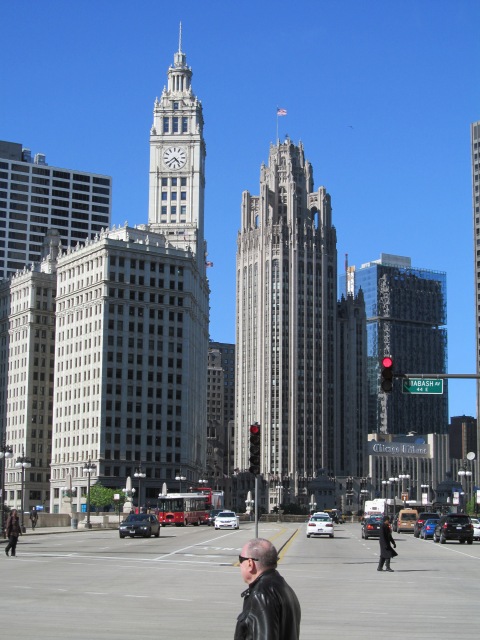 Note the leather coat on the guy in the foreground and the bundled up pedestrians in the street. It was cold!

Why are people too polite at times? On merges, why let aggressive drivers into the lane ahead of you? That’s actually one of the reasons that traffic slows down in construction zones and congested areas. Make them cool their heels enough, and they might figure it out. Maybe. Yeah, I know. When pigs fly.

Despite some of the dramas on the road (trucks running cars off the interstate, cars shooting across multiple lanes without checking for others in the lanes), we had a great visit with family. My niece’s wedding was beautiful, and everyone had a wonderful time. It was a perfect start to her married life. 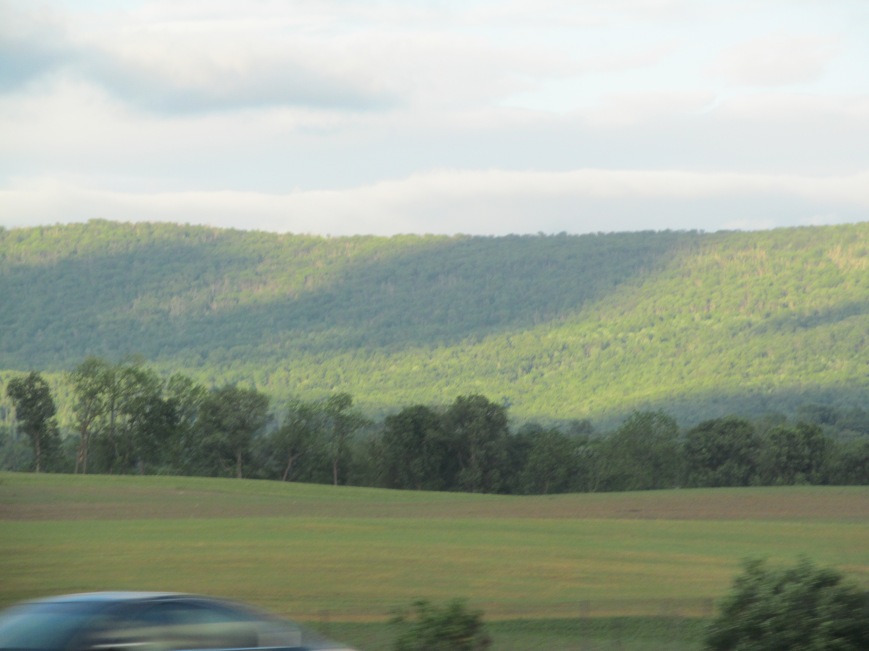 In this photo we’re coming up on South Mountain in northern Maryland. The north and west parts of the state have some good-sized ridges that are called mountains. Those of you living near real mountains should feel free to smile or snicker.

And I hope being back home means I’ll get back to my writing. Will Meghan start whispering again? Will my inner critic let me read Death Out of Time objectively for revisions? There’s only one way to find out–get my behind back in that chair.

Are you ready to kick off summer? Or winter, if you’re in the Southern Hemisphere?

55 thoughts on “Musings From The Road”