Recently my husband and I made a day trip to Gunston Hall in Virginia, the home of George Mason.

Gunston Hall. Evelyn Browne can only wish this was her ancestral home….

Reconstructed yard at Gunston Hall. Most Colonial plantations had separate buildings for the kitchen, laundry, and other daily work. Meghan has found the archaeological remains of similar buildings at Wyndham Thicket Farm.

Most of you are likely drawing a blank. But as the American Revolution loomed, the Bill of Rights that Mason wrote for Virginia formed the basis of the Declaration of Independence. To my mind, this is one reason why the Jefferson Memorial on the National Mall should be repurposed to commemorate all the men—and women—whose thoughts and visions led to that document. Jefferson merely set down their ideas in words. Shouldn’t we remember everyone who contributed those ideas?

Gunston Hall, built from 1755–1759, is a National Historic Landmark and has a commanding view over the Potomac River. As my husband drove there, I thought about the passing scenery.

The Capital Beltway in Virginia. Meghan lives outside it but not by much….

Another view of the Beltway. Traffic isn’t bad on a Saturday morning heading into Virginia. Weekday commutes are another story.

I’ve always thought of this as Madeleine O’Brien territory. But on this trip, Meghan Bode reminded me that she lives here, too. Two characters. Both women. Both archaeologists. Both with similar names. I know—they should be more different. Something has to give.

For now, Madeleine has yielded the stage. Her novel isn’t ready for publication, and we both know it. And Meghan has stepped forward with her ideas.

Her two live “stories,” which really were first drafts, drew a positive response from readers. But as they stand, they’re not “real” stories. They lack antagonists. Meghan lacks flaws and goals.  But they offer a glimpse into the potential of her world and character.

Rural Loudoun County. Madeleine O’Brien found something interesting in this area. I think she and Meghan know each other, even though they work at different universities. I’d bet Meghan’s done some work of her own around here in the past.

And I know her current ideas have the makings of a real story. One with a modern-day antagonist. One with obstacles to her plans. One with a theme and concept.

Writing it will be hard work. That is abundantly clear already.

Archaeologists take a much-needed break from excavations at Gunston Hall. It was 95F that day (35C).

Can I succeed with Meghan where I’ve so far stumbled with Madeleine, and before that, Catherine? Only time will tell. But the planning proceeds. I’ve even let myself draft a couple of scenes. As I said in an earlier post, I’ll never give up pantsing completely. But I think this story is a real litmus test for me as to whether I can craft a tight, well-paced, and engaging novel from Page 1 through The End. The ball’s in Meghan’s court now, and we’ll see what she’s made of and whether she can whip this writer into an author.

So I hope you’ll excuse me as I wrap up this post and get back to: 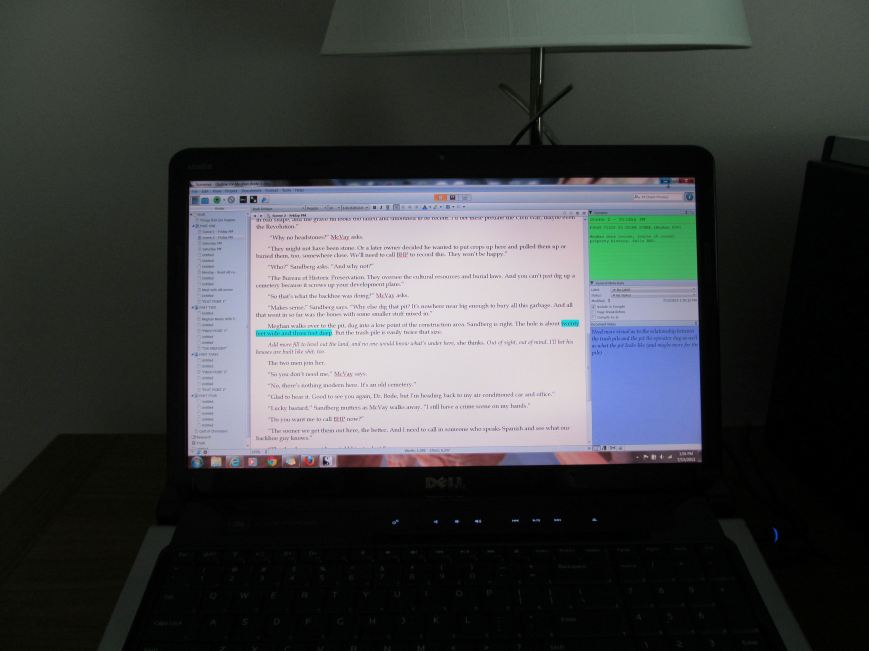 Have a great day, everyone, and may you make good progress on all your endeavors. And for anyone who has faced the dreaded “brick wall” or writer’s block, check out this recent post on Harvesting Hecate. I found it incredibly helpful and a wonderfully positive way to view the situation.

44 thoughts on “This Is Meghan Bode’s Territory Now”