I hope you’ll forgive me for indulging in a few vacation posts. Actually, as I thought about which highlights to cover, I started worrying about overdoing things. I’ll bet everyone has been subjugated to at least one slideshow or home-movie “fest” from a friend or relative. And I don’t want to be that person! So we’ll see just where these posts go….

Kicking Off The Trip — London

We flew into Heathrow via Reykjavik after a thankfully uneventful flight. When news of a pending volcanic eruption in Iceland broke just a few weeks before the trip, we crossed our fingers that it wouldn’t cancel flights like one did a few years ago. Luckily, this one stuck to a lava flow and didn’t release an ash cloud into the atmosphere.

We knew that only two full days in London would mean dashing through lots of sights or focusing on just a few. How should we approach it? Well, we didn’t want to be those tourists we see in DC who rush through the city to see “everything” and end up seeing nothing. So we decided to spend the first full day on one of the hop on/hop off buses, starting with a complete circuit in the morning and then choosing a couple of stops in the afternoon. So from the bus we got to see such things as:

What really struck us, though, was that everywhere the bus went, we saw this:

Traditionally, London has never been a city of skyscrapers, but that’s beginning to change here in the 21st century. In addition to these cranes pronouncing a boom of new construction, scaffolding covered many existing buildings that are undergoing massive renovations. This booming economy, though, would not be seen on the rest of the trip.

Of course, we drove past some of the iconic sites, like Trafalgar Square with its statue of Nelson and the surrounding lions.

In earlier days, the square was full of pigeons. Happy pigeons gorging on the food happily provided by tourists. Ultimately, though, gorged pigeons “clear their digestive systems,” shall we say. And the city finally had enough. The pigeons were forcibly removed, and heavy fines were imposed on anyone who fed the stragglers who sneaked in like the guy above.

We hopped off the bus at a couple of places later in the day. Our first stop was another “must see:”

The oldest parts of the Tower of London date back to William the Conqueror. The lines were huge, so we didn’t go inside to see the Crown Jewels. But we did stroll around. And we quickly noticed that the images we’ve seen on television are carefully staged and cropped. Up close, you might think you were in medieval England. But look just a bit farther beyond, and modern London dwarfs the Tower. The mass of red you see in the last photo is part of the “poppy field” that will commemorate every British soldier who was wounded or killed in World War I.

Our second full day in London was spent at a single location. And given that my husband and I are both archaeologists, how could that location be anything but the British Museum? The holdings of that facility are legendary, and we couldn’t pass up such sights as the Rosetta Stone, which enabled Egyptian hieroglyphics to be deciphered, and the frieze from the Parthenon in Athens (aka the Elgin Marbles), controversial though its setting is. 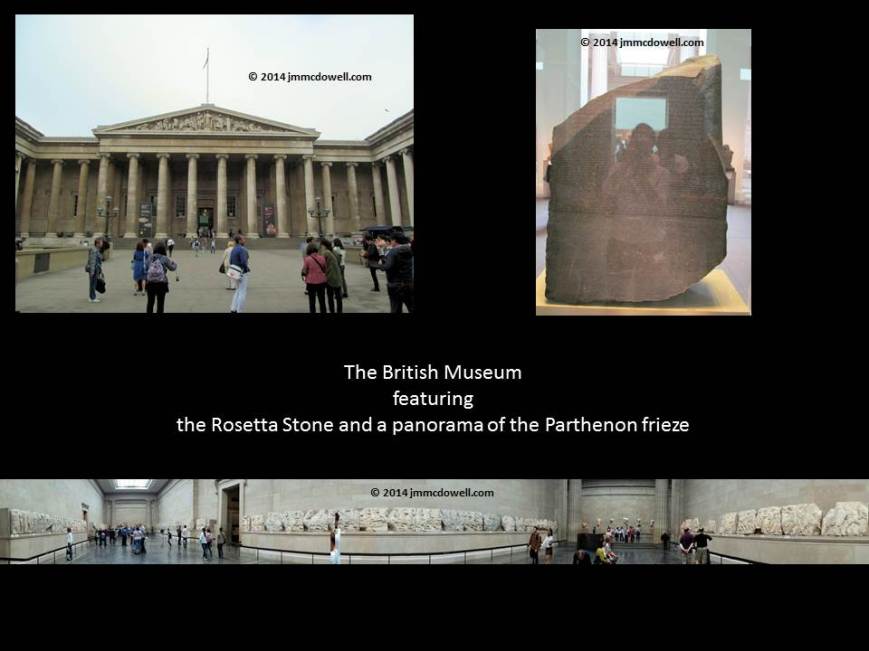 The British Museum, of course, is where we also met the wonderful Vanessa-Jane Chapman and her partner, Neil. No controversies there! Just a lovely visit with two fascinating people. And this particular gift from them was so tasty!

So that was our two full days in London. The next morning, we headed up to King’s Cross Station and took the train to York, where we spent two half days before beginning our walk along Hadrian’s Wall. More on those two places to come.

I know I’m no travel writer, but I hope you’ve enjoyed this take on London. If you’ve been there, I’d love to hear your impressions of the place!