Not my normal posting day, I know, but I wanted to get in an early April update. March is thankfully behind me. If everything had gone to January’s plan, it would’ve been hectic enough with the move. But Life apparently decided that would be too simple.

My mother-in-law passed away on the 8th. As you know, we were prepared, but it’s never easy to say goodbye to loved ones. The funeral on the 13th was a small affair simply because she outlived nearly all of her contemporaries—and too many even from her children’s generation. We take some comfort in the fact that she’s no longer in pain, but we will miss her so much.

I also picked up a nasty bronchitis in March that really wiped me out between the funeral and the move, and it’s still hanging around. Needless to say, that impacted my desire and ability to write even when I had the time last month.

Otherwise known as a major move into a brand new house. If you’ve done it, you know it’s never easy. We’ve identified a few issues the builder needs to address, and undoubtedly there will be more. That’s par for the course. The late winter and early spring were too cold to finish the exterior paint, seed the yard, or lay the asphalt driveway. So the perimeter still looks like a construction zone until those can be wrapped up. And we have to be extra careful not to drag mud and gravel inside—definitely not a good mix with wood floors and light-colored carpets.

Panoramic view of the new office, which is nowhere near done

This includes a new route to work since we’ve moved to another city. My husband will be able to telework one or two days a week, which will be really nice for him. Luckily, we each have our own office in the new house, which will make it easier on those days when we’re both working from home.

I also hope this means I can ease into a new writing schedule that is for the sheer enjoyment of writing and not simply a coping mechanism with all the changes March brought. All things considered, the writing numbers weren’t bad. I added 5,197 words to the manuscript and managed to write on 17 days. Of course, that was all at the first part of the month. It’s time to start fresh for April and see if I can pick up where I left off. 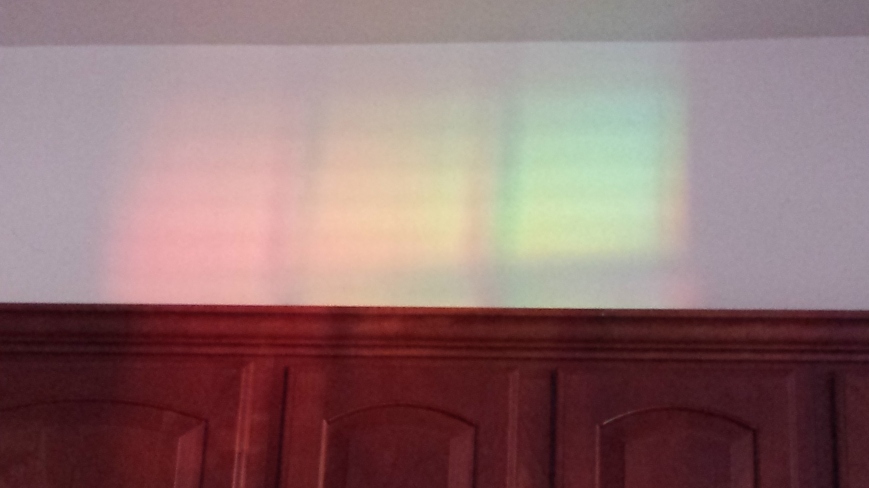 This rainbow appeared our last week in the old townhouse. The source was unexpected.

It was the sun reflecting off a parking sign.

I still won’t be posting every week, but you should be seeing more of me around your blogs!

54 thoughts on “A Pause, A Scramble, And A New Routine”